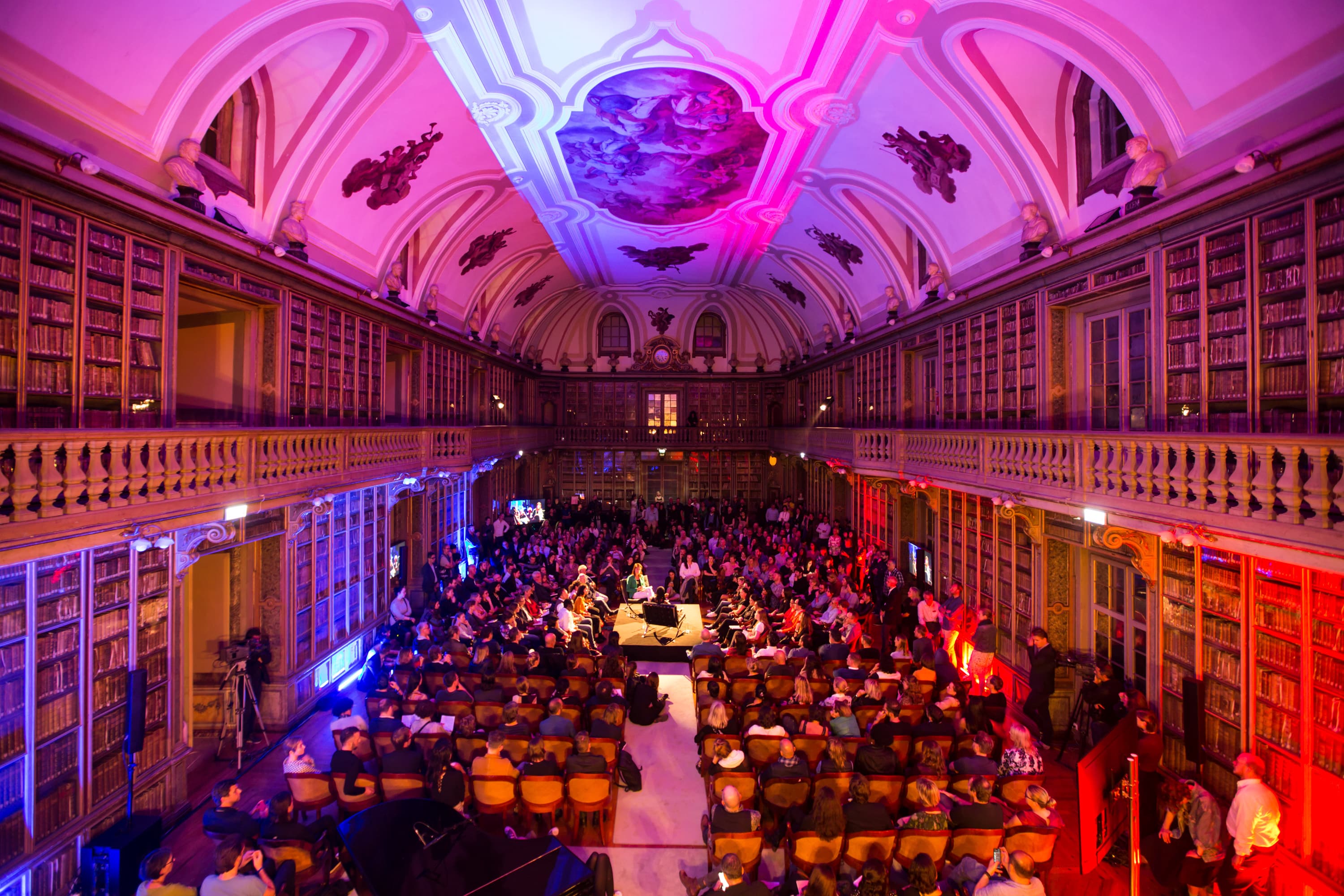 In the spirit of the House of Beautiful Business, this is not a retrospect like any other but a collection of highlights to read and watch. Cause what could we do better with our numerous impressions than to put them into action and pass them on?!

From Saturday to Wednesday we were in Lisbon. We are Karel, Minjoo, Vinay, Isabel and me. We were fuelled with new ideas, philosophy, talks and people. As we wrote in the announcement: It was intense. Now the experience sinks in and we like to share.

Therefore, here a short summary of our very personal highlights in combination with links, book recommendations etc. Have fun reading!

Who believes in magic? Didn't we leave that behind with technical progress? By no means says Rubens Filho, who impressively proved with his lecture "Bend minds and (maybe) forks" that belief in oneself and magic makes everything possible. In addition, he is as ice-obsessed as we are and an excellent conversational partner at sunset, when you are just staring at the water.
Abracademy

It pays to be attentive at Leyla Acaroglus appearances: she speaks quickly and energetically. Which was hard for some inexperienced minds. But luckily her design-driven, systematic approach is preserved in several videos, where you can also pause.
‍

Also worth seeing: TEDTalk or her TEDx Talk

We have more in common than one would think facing daily news. And Mathieu Lefevre proves that with his keynote speech. If you want to believe in the good in all of us and are looking for quantitative and qualitative evidence, check out the publications of moreincommon.com - including the latest study "The Other German Division: State and Sustainability of our Society" or "Hidden Tribes", which breaks the dull dichotomy of Republicans and Democrats.

Jess Kutch actively supports the reorientation of work with Coworker.org. An eye-opening moment in her presentation was the linking of digital media and workers' rights shown in the Google Walkout. Who needs unions, if there is social media, was a discussion topic among the conference attendees, which was not finally clarified.

Ed Gillespie is not the classic white collar guy but rather the rough-charismatic leader. Therefore, it was no surprise that his contributions were polemical, dynamic and startling. With various performances he pleaded for more biodiversity, activism and a different as well as rethinking, before this/our planet becomes hell. And he also took the trouble to translate one of his keynotes into a blog post. So happily clicked and read: Rage against the eremocene
In this article he also sums up a very nice talk, which we also liked very much: "I loved Moon Ribas' session on becoming a transhuman 'sensonaut', sharing the seismic activity through an implant in her elbow. Extending her body into a connection with the vibration of the earth, using technology to reveal reality. "
Moon was also in Munich on a TED stage and this is hereby recommended as a must-watch.

There is a difference between "couples who work" and "couples that work". Jennifer Petriglieri's lecture made her book extremely appetising by dedicating her own personal experiences to the common challenges that two working people face in a relationship, especially when children and careers are to be reconciled.
Couples That Work: How To Thrive In Love And Work Paperback - October 10, 2019

Gilad Rosner delivered a talk to be shouted from the rooftops. Data protection is state mandate and self-responsibility alike. How many cameras and microphones are currently in your house? A disturbing number of more than 7 devices are watching and listening to us on average. And that should upset us! Those who listened to Gilad's talk will read carefully GTCs in the future and more often pull out the plug for some devices.

Elaine Kasket also deals with the fact that we are leaving tons of digital traces. She devotes her research to that digital legacy. Because what happens to our digital heritage? Who owns our search histories, social media profiles and e-mails? The dilemma is impressively illustrated in this article: MEDIUM, What happens to our data when we die
‍

In many lectures, we heard about abandonment, less waste, more sustainability, less products, less of bad things. The meaningful production of useful things seemed threatened with extinction (outside the digital cosmos). Dara showed that the meaningful production of useful things is possible. With her whispered speech (she had lost her voice that day), she proved that design can be the epitome of utility and 3D printing may not save the world alone, but has enormous potential to make the world a better place!

Different and extraordinary are two categories that seem to have been made for Adah Parris and Alissa Wilms. Adah unites spirituality and bytes, while Alissa jumps from Schrödinger's cat to the downfall of encryption technology without mentioning her imdb entry. Two sensational women, whom we hope to hear more often.

Karel was very keen on Anand Giridharadas' talk and this is how he reminisces it: "It is rare that business conferences offer pointed, precision surgery like podium discussions. But Anand’s appearance, call it performance, was like one of Muhammad Ali’s. Beautifully eloquent in phrasing though absolutely brutal in its truth without mercy for his opponents, he opened the audience’s mind often dulled by general audience. It is no win win situation if a corporation evades taxes and sponsors with fraction of the „savings“ a new Museum for a city. Our economic system is so broken, we have been manipulated so systemically and this on a global level, its tragedy. In the end he states: real change includes the loss of real power."
For further reading, this FastCompany article is recommended, which also celebrates his book and the core idea.

Ian McDonald and Caroline Ramade showed by personal example that diversity, integration and equality must not be intellectual exercises, but must become a living corporate reality if we are to develop good ideas for saving the world.

If you want to catch breath after all this intense issues, you should click here and take in daily "beautiful news". David McCandless showed among other topics in his talk with just one infographic that there will hardly be any Brexit-winners.

In addition to the presented here, there were still unbelievable many, great, exciting and crazy to disturbing further talks, workshops and moments. Vinay was f.e. super happy to meet Tina Roth Eisenberg, founder of CreativeMornings. But by now you already know that it was pretty cool!

‍
So let's end with our contribution to the House 2019:

The House of Beautiful Business team has given our installation an appealing name for the sitemap: Apparatus of Euphonious Thinking. Sounds great and exactly matches what we did there. We turned the thoughts of the visitors - also from Elaine Kasket - into music, which resulted in a wonderful symphony on the last evening.
More about our installation and the music of all performances can be found here: BRAIN MUSIC

Oh, and Karel was also on stage on the subject of "Rebels!" but #morelater